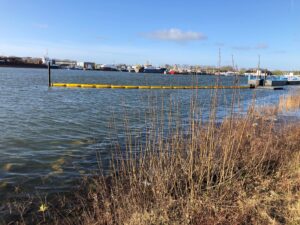 PULSAQUA was asked to address both of these issues by a) collecting and synthesizing the available data and information from the different partners and b) identifying relevant knowledge gaps that need to be filled in order to understand why the Shoreliner was not able to catch plastic at its three most recent locations. Lastly PULSAQUA also included  various recommendations that can help the partners improve functionality and effectivity of the Shoreliner.

The results of our research were presented to and discussed with involved partners at July 14th. This report will help the involved actors to determine if and how the they can continue with the Shoreliner to maximize its potential in the future.

The video below (Dutch only) gives you some basic information about the Shoreliner, and also touches upon some unanswered questions regarding the Shoreliner’s functionality.

The Shoreliner Rijkswaterstaat project contributes to the following SDGs: